The River Raisin Ragtime Revue (R4) is a professional theater orchestra dedicated to educating and entertaining via the performance, preservation and restoration of significant American music. R4 highlights the development of our country’s original popular musical style – ragtime. Utilizing a meticulously-researched and engaging narrative, R4 transports the audience to the cultural and social conditions of turn-of-the-century America. Special emphasis is given to the contributions of African American composers and the obstacles they overcame in attempting to gain acceptance of this unique, original art form.

The River Raisin Ragtime Revue is based in Tecumseh, situated on the River Raisin in Southeast Michigan. R4 regularly performs at quality venues including The Henry Ford Museum, the Detroit Institute of Art, and Ann Arbor’s Michigan Theater and has partnered with historic Greenfield Village in Dearborn, Michigan, to present a major annual ragtime festival drawing thousands. R4 has collaborated with the Detroit Symphony Orchestra and numerous major soloists to create engaging community programming. R4 produces an annual Ragtime Extravaganza! program that brings together musicians, dancers, actors and visual artists to recreate a ragtime-era vaudeville revue. As part of its mission to bring music to underserved areas, R4 has participated in school workshop programs throughout the state and has brought high-caliber entertainment to hospitals and assisted-living communities.

In 2011, R4 partnered with Greenfield Village to release Raggin’ at Greenfield Village, which showcases the many styles of ragtime the orchestra has performed there. This CD includes the first published rag by an African American composer and historically important music that had never been previously recorded.

Their second live album was recorded the following year. Music of Reginald R. Robinson, Live in Concert is the collaboration of Robinson’s contemporary ragtime compositions arranged for the 13-piece ensemble in 2016.

R4’s next collaboration, Nobody is Somebody, is a collaboration with bass-baritone Daniel Washington from 2019. Washington is Professor of Voice at the University of Michigan School of Music Theatre and Dance. This CD features original orchestrations of popular African American songs and spirituals from the turn of the twentieth century. The orchestrations were created by R4 Music Director Emeritus William Hayes.

R4’s most recent cd, Blaze of Glory, explores the role and evolution of the trombone in early American popular music. It begins with the trombone fantasias of Frederic Innes and early polkas and extends through the ragtime and early jazz eras. You’ll hear peppy marches, toe-tapping ragtime, and beautiful ballads. The included compositions show how orchestrators used the trombone programmatically and as a contrast to the more subtle string counter-melodic lines of the cello.

These recordings have received outstanding reviews in local, national and international publications and have been aired on radio stations around the world. George Chien, writing for Fanfare Magazine states, “…an eminently enjoyable disc…played with infectious enthusiasm…it is education, entertainment, and a sonic blast rolled into one.” Mike Durham of Just Jazz [London, England] writes, “The music on this CD [Ragtime Detroit!] has been meticulously researched and is performed to an equally meticulous high standard. This CD is packed with rare treasures, beautifully played.” Scott Yanow of The Los Angeles Jazz Scene writes, “The high musicianship which is very apparent in the ensembles, the musicians’ familiarity with the pre-1920 styles and phrasing, and Robert Lindahl’s versatile and superior trombone playing make Blaze Of Glory an enjoyable listen and a must for ragtime collectors.”

Our CDs can be purchased online in the R4 Store. You can see more reviews of our work on the Testimonials page. 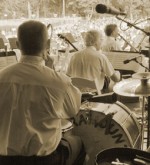